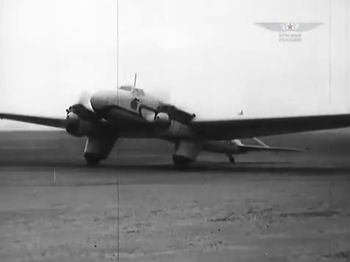 The French engineer André Laville went to Soviet Union and led the design of the DI-4, a two-seat high-wing monoplane, with a gull wing and twin tail fins fighter. Despite not put into production, the quality of the design made great confidence from authorities and so Laville could think an airliner to replace the obsolete Tupolev ANT-9s and Kalinin K-5s. Instead chasing top possible speed, the design was concentrating on reliability and safety of the aircraft for passenger flights. The result was a low-wing cantilever monoplane of conventional design, with twin engines and a fixed landing gear for fourteen passengers. Despite Laville was already back in France in 1935 at the time of the maiden flight, the project was christened Laville PS-89 (for : Passzhirskiy Samolot / Airliner). The last drawing and prototype assembly were then led by engineer A.V.Kulev who died in the crash of the first airframe. The crash was attributed to a flaw in the workmanship, not in the design, and work continued with a small series of seven airframes built on the Aircraft Repair Factory named after Goltsman (Zavod Imeni Goltsmana, so comes the other designation: ZIG-1). The commercial service has no incident and proved reliable during the four years before Germany invasion of June 1941.

This page lists all films that feature a Laville PS-89 (or ZIG-1).