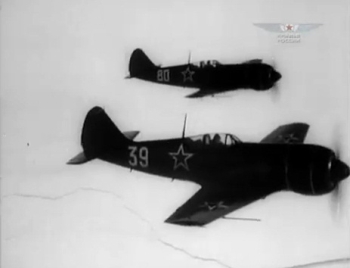 The Lavochkin La-11 was a piston-engined Soviet fighter developed from the Lavochkin La-9. With a range increased by 28%, it was tasked to escort bombers from 1947 but others performance suffured of the increased fuel weight. Moreover, it was found to be poorly suited for combat above 7,000 m. Its tally during the Korean War wasn't exceptional at a time when technical performances evolved quickly and the arrival of the first jets. Neverless, People's Liberation Army Air Force imported 163 La-11 fighters from 1950-1953 and a handfull were used until 1966.

This page lists all films that feature a variation of the Lavochkin La-11.