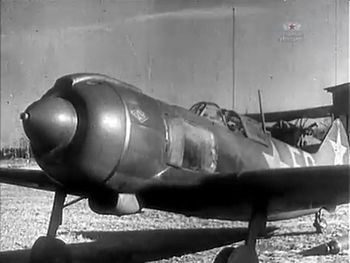 The Lavochkin La-5 was a Soviet fighter aircraft of World War II. The design bureau fit its predecessor, the Lavochkin LaGG-3, with a Shvetsov ASh-82 radial engine in order to solve the problems of the originally underpowered airframe. Quickly, after a thousand aircraft were built, a new variant was produced with further upgrades (the most visible being the new canopy allowing a better rearward view). A fuel-injected engine, further lightening of the aircraft, and fixed slats to improve all-around performance were also features of the La-5FN. A dedicated two-seater trainer version was named La-5 UTI. Despite the great number of airframes built from 1942 to the end of the war, only the Czechoslovakian Air Force operated the La-5 outside the USSR.

A total of 9,920 Lavochkin La-5s of all variants have been built.

This page lists all films that feature a variation of the Lavochkin La-5.