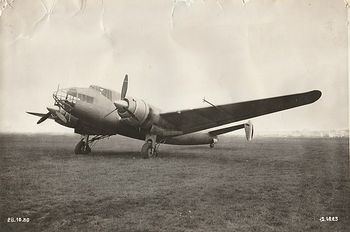 The Lioré et Olivier LeO 45 was a French medium bomber that was used during and after the Second World War. It had been originally designed and developed for the newly formed Armée de l'air as a modern medium bomber capable of performing independent strategic operations, unlike the majority of previous French bombers.

The LeO 45 was a low-wing monoplane, all-metal in construction, equipped with a retractable undercarriage and powered by two 1,060 hp Gnome-Rhône 14N engines. The prototype, which made its maiden flight on 15 January 1937, had been outfitted two 1,100 hp Hispano-Suiza engines. The LeO 45 had been developed with the aim of providing a modern and advanced bomber for the new Armée de l'air, which had gained its independence on 1 April 1933. Introduced to operational service in 1938, it was a very effective and capable bomber.

As only a handful of aircraft had been introduced into the French Air Force by the outbreak of the Second World War (due to a change of the powerplant which led to an eighteen month delay), the LeO 45 had effectively appeared too late in order for the type to provide any substantial contribution during the Battle of France in the face of an invasion by Nazi Germany. As a result of the Armistice of 22 June 1940, the LeO 45 was being operated in quantity by both sides of the conflict; while the type continued to be manufactured and operated by occupied Vichy France, the Free France forces also operated the aircraft. The LeO 45 participated in combat missions throughout the remainder of the war but more and more often flew for freight duties. Luftwaffe used some airframes as cargo and troop transport on the Eastern front (LeO 451 T) and Italy requested for around 40 aircrafts sized after the fall of Vichy France (post November 1942), but they saw nearly no action before Italy surrendered. French LeO 45s in North Africa quickly suffured lack of spare parts. After 1945, around twenty airframes left by retreating German armies were used for research tasks (until 1957) alongside a small number used for transport and training which were quickly written off.

And five airframes were rebuilt and powered by SNECMA (Gnome-Rhône) 14R engines, fitted with oval vertical stabilizer. These LeO 455 P (or Ph) were used by I.G.N. (Institut Géographique National / (French) National Institute of Geographic) for mapping until 1955.

This page contains all films, TV series, and video games that feature the Lioré et Olivier LeO 45 and derivatives.