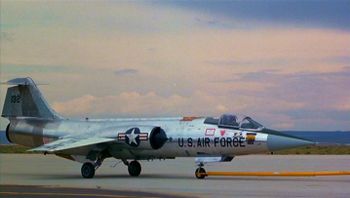 The Lockheed F-104 Starfighter is an American single-engine, high-performance, supersonic interceptor aircraft that served with the United States Air Force (USAF) from 1958 until 1969. One of the Century series of aircraft, it continued in service with Air National Guard units until it was phased out in 1975. The ultimate production version of the basic fighter-model F-104 was the F-104S all-weather interceptor designed by Aeritalia for the Italian Air Force. A set of modifications produced the F-104G model, which won a NATO competition for a new fighter-bomber. Several two-seat trainer versions were also produced, the most numerous being the TF-104G. A total of 2,578 Starfighters were eventually produced, mostly by NATO members. The F-104 served with the air forces of over a dozen nations. The operational service of the Starfighter ended with its retirement by the Italian Air Force in May 2004, some 46 years after its introduction in 1958 by the USAF. The poor safety record of the Starfighter brought the aircraft into the public eye, especially in Luftwaffe service. The subsequent Lockheed bribery scandals surrounding the original purchase contracts caused considerable political controversy in Europe and Japan.

This page lists all films that feature a variation of the Lockheed F-104 Starfighter.