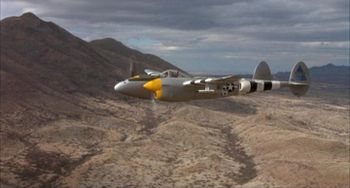 The Lockheed P-38 Lightning was a World War II American fighter aircraft developed to a United States Army Air Corps requirement. The P-38 had distinctive twin booms and a single, central nacelle containing the cockpit and armament. Named "fork-tailed devil" by the Luftwaffe and "two planes, one pilot" by the Japanese, the P-38 was used in a number of roles, including dive bombing, level bombing, ground-attack, photo reconnaissance missions,and extensively as a long-range escort fighter when equipped with drop tanks under its wings. The P-38 was used most successfully in the Pacific and China-Burma-India Theater of Operations. It was the only American fighter aircraft in production throughout American involvement in the war, from Pearl Harbor to Victory over Japan Day.
Several variant were dedicated to aerial photo reconnaissance under the types F-4 and F-5.

This page lists all films that feature a variation of the Lockheed P-38 Lightning.