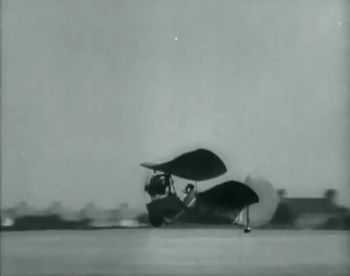 Appleby Sv HM14 POU-DU-CIEL seen in The Conquest of the Air.

The Mignet HM.14 Pou-du-Ciel (Flying Flea) literally "Louse of the Sky" in French, is a single-seat light aircraft first flown in 1933, designed by French radio engineer Henri Mignet for amateur construction. It was the first of a family of aircraft collectively known as Flying Fleas. It was the result of an ambition to design a safe aeroplane that could be built quickly and cheaply by any amateur familiar with simple woodwork and metalwork skills. It followed a progressive series of designs, of which the HM.8 monoplane was already successful as an amateur-built aircraft. Subsequent examples were built with many optional engine and wingspan variations.

This page lists all films that feature the Mignet HM.14 Pou-du-Ciel.