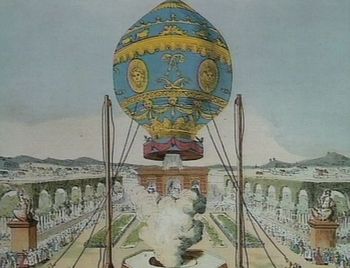 Montgolfière Le Réveillon seen in The Story of Aviation.

In collaboration with the successful wallpaper manufacturer Jean-Baptiste Réveillon, Jacques-Étienne Montgolfier constructed a 37,500-cubic-foot (1,060 m3) envelope of taffeta coated with a varnish of alum (which has fireproofing properties). The balloon was sky blue and decorated with golden flourishes, signs of the zodiac, and suns. The design showed the intervention of Réveillon. The next test was on the 11th of September from the grounds of la Folie Titon, close to Réveillon's house. There was some concern about the effects of flight into the upper atmosphere on living creatures. The king proposed to launch two criminals, but it is most likely that the inventors decided to send a sheep, a duck, and a rooster aloft first. On 19 September 1783, the Aérostat Réveillon was flown with the first living beings in a basket attached to the balloon: a sheep called Montauciel ("Climb-to-the-sky"), a duck and a rooster. The sheep was believed to have a reasonable approximation of human physiology. The duck was expected to be unharmed by being lifted aloft. It was included as a control for effects created by the aircraft rather than the altitude. The rooster was included as a further control as it was a bird that did not fly at high altitudes. This demonstration was performed before a crowd at the royal palace in Versailles, before King Louis XVI of France and Queen Marie Antoinette. The flight lasted approximately eight minutes, covered two miles (3 km), and obtained an altitude of about 1,500 feet (460 m). The craft landed safely after flying.

This page lists all films that feature the Montgolfière Le Réveillon.