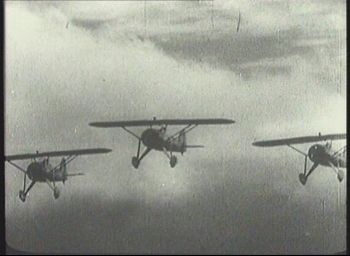 The Morane-Saulnier MS.225 was the ultimate parasol fighter designed by this company. Ordered as an interim fighter in 1934, 75 of them were built and mainly used by the Armée de l'Air (French Air Force) while 16 were on strengh of the Aéronautique Navale (French Fleet Air Arm) in 1934 and 1935. Three airframes were sold to China. In 1936, all aircraft were under Armée de l'Air command but withdraw from front-line units. Used for training tasks, nearly twenty of them were still on strengh when World War 2 broke out.
Three prototypes aircraft with an arrester hook and floating bags were built in 1932 but not ordered. In June 1934, the two surviving MS.226 (number 01 and 03) were given to the Aéronautique Navale and used for training of the Béarn carrier vessel unit during several years.

This page lists all films that feature a Morane-Saulnier MS.225 and derivatives.