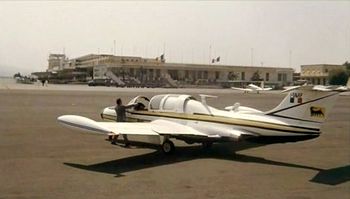 The Morane-Saulnier MS.760 Paris is a French four seat jet trainer and liaison aircraft built by Morane-Saulnier. Based on the earlier side-by-side seating two-seat trainer, the MS-755 Fleuret, but adding an additional row of two seats, the Paris was used by the French military between 1959 and 1997. In 1955, a short-lived venture with Beech Aircraft to market the Paris as an Executive Business Jet in the US market (including an extended six seat Paris III) was soon eclipsed by Learjet’s Model 23. While four seat propeller planes are common, jet-powered planes with this seating arrangement such as the Grumman EA-6B Prowler are comparatively rare.
119 airframes were built for the civil market and the French Air Force, the Aéronautique Navale (French Fleet Air Arm), the Força Aérea Brasileira (Brazilian Air Force) and 36 others were built under license by FMA in Argentina, the Fuerza Aeréa Argentina using 12 more others airframes delivered by Morane-Saulnier.

This page lists all films that feature a variation of the Morane-Saulnier MS.760 Paris .