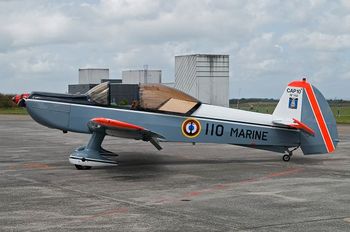 The Mudry CAP 10 is a two-seat side by side training aerobatic aircraft developed from the Piel Super Emeraude. Built from the 1970's, this low-wing cantilever monoplane of wooden construction is powered by a 180 hp fuel injection engine, fully lubricated in inverted flight. Its 1980's derivative the CAP 20 is a single-seat which led itself to the successful competition family CAP 23x.

This page lists all films that feature a variation of the Mudry CAP 10.