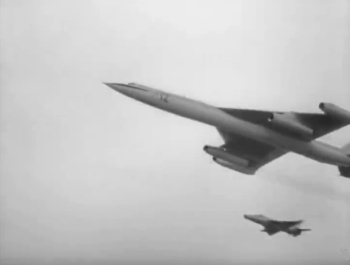 The Myasishchev M-50 was a Soviet prototype four-engine supersonic bomber which never attained service. Two engines were located under the wing and two on the tips of its shoulder-mounted, truncated delta wings. The first flight was on 27 October 1959 and M-50 participated in a Soviet Aviation Day flyby in 1961. M-52, slighty different by its tail, was completed but was not flight tested. The program was terminated due to the development of the ICBMs and the priority assigned to the Soviet space program.

Only two Myasishchev M-50/52 were built.