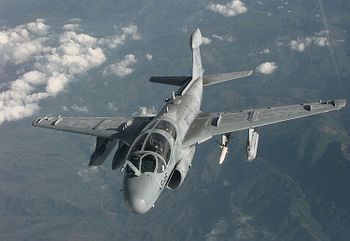 The EA-6B Prowler is a twin-engined, mid-wing electronic warfare aircraft operated by the U.S. Navy and U.S. Marine Corps. The aircraft is based on the A-6 Intruder airframe. The aircraft is carrier-capable and its main missions include radar jamming and signals intelligence. It was originally designed and manufactured by Grumman.

This page lists all films that feature a variation of the Northrop Grumman EA-6B Prowler.