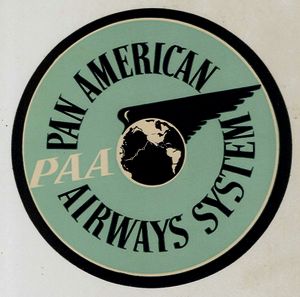 Pan American Airways System was founded in 1929 in a response of The Air Mail Act of 1925 (Kelly Act). The Act authorized the awarding of government mail contracts to private carries, and established rates for transporting mail. This Act inspired owners of aircraft and investors to start up air carrier services, providing airmail service as it was very profitable. Pan American Airways System, was one of several air carriers that grew out of the Kelly Act. Pan American Airways System had procured a lucrative airmail contract from the United States Postal Service in 1927. The contract was to deliver mail to and from the Country of Cuba and United States. It was the Key West, Florida Havana Mail Route The airmail service to Cuba, had proved to be a very profitable route for PAA. Its owner, Juan Terry Tripple had such success he expand services between the United States, Mexico and Latin America by 1930. On May 20, 1939, PAA launched the first U.S. passenger service to Europe, using the Boeing 314 Yankee Clipper, the "flying boat". With the explosion of the Zeppelin Hindenburg in 1937, the flying boat replaced the need for such airships as the Zeppelin Hindenburg. However, the flying boat soon became obsolete. With the United States entering into World War II, PAA began providing military transport of US troops into Europe, Africa and Asia. This gave PAA the insight and edge over other carriers into that part of the world. By the end of the war, PAA had establish passenger and cargo routes throughout the continents of Africa, Europe and Asia with a new livery and brand name: Pan American World Airways.