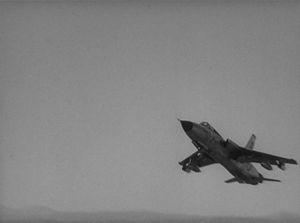 The Republic F-105 was a supersonic fighter bomber used by the United States Air Force most notably in the Vietnam war. Nicknamed the 'Thud' the Thunderchief was capable of Mach 2 at high altitude and was the largest single engined fighter employed by the USAF. The F-105 is also noted for being the only American aircraft to have been retired due to high attrition rates. Of the 833 produced 382 were lost in Vietnam leading to the conclusion that the Thud was no longer combat effective.

This page lists all films that feature a variation of the Republic F-105 Thunderchief.