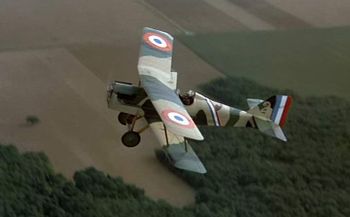 The Royal Aircraft Factory S.E.5 was a single-engined, single-seat biplane fighter aircraft used during the First World War. Although featuring generally better performance, the S.E.5 only complemented the Sopwith Camel in the later years of the war. The aircraft was manufactured by a variety companies, with the Royal Aircraft Factory actually building a minority of them.

This page lists all films that feature a variation of the Royal Aircraft Factory S.E.5.
NOTA : some replica have been built to act as this British fighter ; you should read too the Slingsby T.56 page.