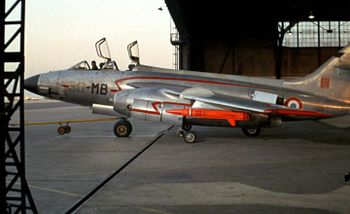 The SNCASO started the study of the SO.4050 Vautour in 1951. It was a french twin jet aircraft, shoulder-wing monoplane with a 35° swept wing. It had a bicycle-type landing gear and three variants were produced: the single seat II A for long range Attack; two variants were two-seat, the II B (with a glass nose) for bombing tasks; the II N all weather/night interceptor with cockpits in tandem.
Designed by Sud-Ouest (in fact SNCASO), it went under production by Sud-Aviation (the compagny born in 1957 of the merger of Sud-Est (SNCASE) and Sud-Ouest (SNCASO)).

The only export customer, Israel, was the sole operator to use it in combat.

A total of 149 SNCASO SO.4050 Vautour airframes were built by Sud Aviation at the end of the fifties.

This page lists all films that feature a variation of the SNCASO SO.4050 Vautour.

Pages in category "SNCASO SO.4050 Vautour"