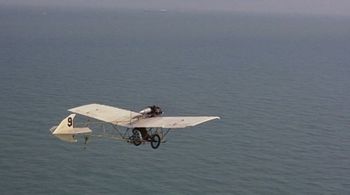 Santos-Dumont Demoiselle No.21 replica seen in Those Magnificent Men in Their Flying Machines or How I Flew from London to Paris in 25 hours 11 minutes.

The Santos-Dumont Demoiselle ("Damselfly") was an early aircraft built in France by Brazilian aviation pioneer Alberto Santos-Dumont. It was a light-weight monoplane with a wire-braced wing mounted atop an open-framework fuselage built around a reinforced bamboo boom. The pilot's seat was below the wing, and between the main wheels of the undercarriage. The rear end of the boom carried a tailwheel and a conventional empennage. First flight in 1908.

In 1909, the german aviation pioneer Hans Grade built his second airplane with the same formula of the Demoiselle. 80 of them were built in the five following years.

This page lists all films that feature the Santos-Dumont Demoiselle.