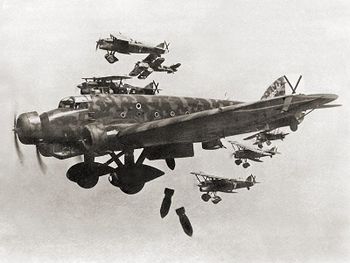 The Savoia-Marchetti SM.81 Pipistrello (Italian: bat) was the first three-engine bomber/transport aircraft serving in the Italian Regia Aeronautica. When it appeared in 1935, represented a real step ahead in Italian military aviation: it was fast, well armed and had a long range. It proved effective during the war with Ethiopia and the Spanish Civil War. [1] Despite being too slow to remain competitive as a bomber in the latest years of World War II, it was one of the most flexible, reliable and important aircraft of the Regia Aeronautica from 1935-1944, and adapted to second-line duties in performing a wide range of tasks.

This page lists all films that feature the Savoia Marchetti SM.81.