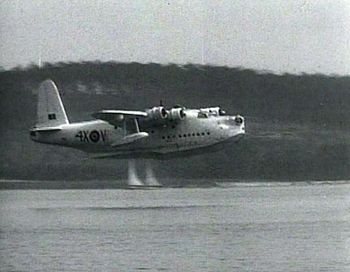 The Short S.25 Sunderland was a British flying boat patrol bomber developed for the Royal Air Force by Short Brothers. Based in part upon the S.23 Empire flying boat, the flagship of Imperial Airways, the S.25 was extensively re-engineered for military service. It was one of the most powerful and widely used flying boats throughout the Second World War, and was involved in countering the threat posed by German U-boats in the Battle of the Atlantic. It took its name from the town (latterly, city) of Sunderland in Northeast England.

Several developments of the Sunderland were produced as Short S.45 Seaford, a longer ranged maritime patrol bomber for RAF Coastal Command, and Short S.25 Sandringham by the demilitarized conversions of military flying boats previously operated by the Royal Air Force.

This page lists all films that feature a variation of the Short Sunderland.