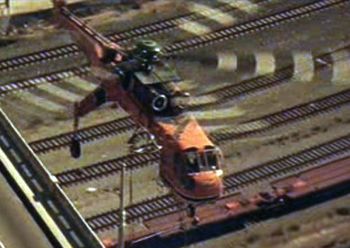 The Sikorsky S-64 Skycrane is an American twin-engine heavy-lift helicopter. It is the civil version of the United States Army's Sikorsky CH-54 Tarhe. The S-64 Aircrane is the current production version, manufactured by the Erickson Air-Crane company. About 110 aircraft built.

This page lists all films that feature the Sikorsky S-64.