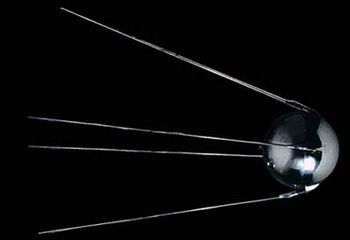 Sputnik was a series of three satellites launched into space by the Soviet Union from 1957-1958. Sputnik 1 was the first artificial satellite to go into orbit, launched 4 October 1957. Sputnik 2 was the first spacecraft to carry a living animal (the dog Laika), launched 3 November 1957. Sputnik 3 was a research satellite launched 15 May 1958. Of the three, Sputnik 1 is the best known, as it set off the Sputnik Crisis in the United States and began the Space Race.

This page lists all films, TV series, and video games that feature a Sputnik satellite.