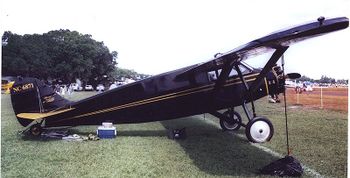 The Stinson Junior was a high-winged monoplane of the late 1920s, built for private owners, and was one of the first such designs to feature a fully-enclosed cabin. Based on the previous high-winged six-seat SM-1 Detroiter, Stinson redesigned the aircraft with shorter span wings, shorter fuselage and a choice of less powerful engines as in the SM-2 Junior. It first flew in mid-1928 and deliveries commenced that year. The design was further developed to produce the more powerful and heavier SM-7 and SM-8 models which were full four-seaters and these were also used by commercial firms. The Junior R of 1932 had a deeper fuelage and a low-set stub wing to mount the undercarriage and wing struts.

This page lists all films that feature a variation of the Stinson Junior.