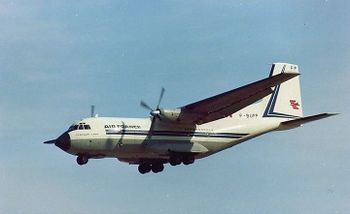 The Transall C-160 was a military transport aircraft developed by a consortium of French and German aircraft manufacturers. The C-160 was originally conceived as a replacement for the French Air Force's Nord Noratlas fleet. It is turboprop-powered and of conventional configuration for aircraft of this type, with high wings, and a loading ramp built into the rear of the fuselage. It was operated by Luftwaffe, Armée de l’Air, South African and Turkish Air Forces, but also for civilian use with the french Aéropostale and some other companies. Originally developed by the joint venture of Nord Aviation, Weser Flugzeugbau and Hamburger Flugzeugbau (WFB), later versions were produced by the respective successors Aérospatiale, Vereinigte Flugtechnische Werke (VFW) and Messerschmitt-Bölkow-Blohm (MBB).

This page lists all films that feature a variation of the Transall C-160.