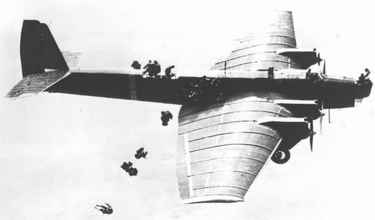 The Tupolev ANT-6 (named TB-3 once being pressed into military service) was a heavy bomber all-metal aircraft of steel construction. It was the world's first cantilever wing four-engine heavy bomber. Design started in 1926 and the protype first flew in 1930. Production ran from 1932 to 1937 and service was offcially stopped in 1939. But war's needs and its unequal loading capacities put the TB-3 again in service as a cargo and paratroop transport despite outclassed by modern fighters. Several missions in the Zveno configuration (where the TB-3 acted as the mothership of I-16 fighter-bombers, for example) occured with success but with heavy losses too. Some civil planes took part in the 1937 North Pole expedition. Several airframes were used by Aeroflot as freighter (and then named G-2).

A total of 818 Tupolev ANT-6 of all series have been built.

This page lists all films that feature a variation of the Tupolev ANT-6 / TB-3 or G-2.