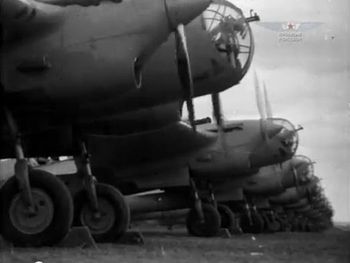 Line up of Tupolev SB seen on DVD02 of Wings of Russia.

The Tupolev ANT-40, mostly known by its service name (Tupolev SB), was the first modern stressed-skin aircraft produced in quantity in the Soviet Union and one of the most successfull aircraft of its time. After a first flight on 7 October 1934, it was introduced in 1936 and was widely used throughout several limited wars of the second half of the thirties : Spanish Civil War, China, Mongolia, etc ... Faster than most the fighters during the thirties, it was outdated in june 1941 when Barbarossa occured despite the use of new more powerfull engines. At that time, it was the most numerous soviet bomber. It was also used in various duties in civil variants.

More 6 600 Tupolev SB of all variants were built.

This page lists all films that feature a variation of the Tupolev SB (ANT-40).