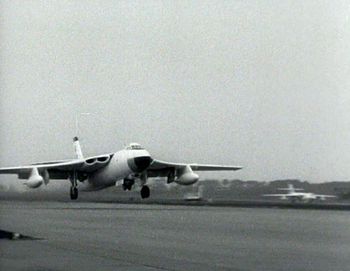 Vickers Wellesley seen in Ep 4.6 of The Avengers (TV Series).

The Vickers Valiant was a British military strategic bomber produced during the 50's (*) and which serves during a decade. First of the three 'V' british atomic capable bomber, it was able to fulfil the photo-reconnaissance and tanker roles in its next variants. The Valiant was Vickers' last purpose-built military aircraft (even if the jet passenger Vickers VC10 was also used as a military transport and tanker by the RAF). Its last flight occured in 1965.

This page lists all films that feature a variation of the Vickers Valiant.