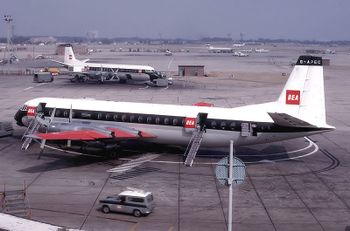 The Vickers Type 950 Vanguard is a British short/medium range, four-engined, turbo-prop airliner produced just before the introduction of jet airliners. Only 44 were built and the type became most successful as a cargo conversion, the 953C Merchantman.

This page lists all films that feature a variation of the Vickers Vanguard.