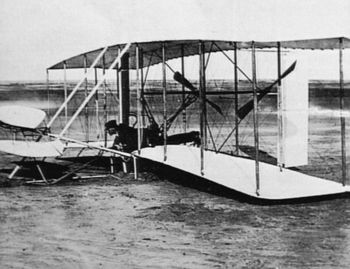 Wright Flyer I seen in The Story of Aviation .

The Wright Flyer I was the first powered aircraft, designed and built by the Wright brothers. They flew it four times on December 17, 1903 near the Kill Devil Hills, about four miles south of Kitty Hawk, North Carolina, U.S. The U.S. Smithsonian Institution describes the aircraft as "...the first powered, heavier-than-air machine to achieve controlled, sustained flight with a pilot aboard." The Fédération Aéronautique Internationale described the 1903 flight during the 100th anniversary in 2003 as "the first sustained and controlled heavier-than-air powered flight."

This page lists all films that feature the Wright Flyer I.

Pages in category "Wright Flyer I"