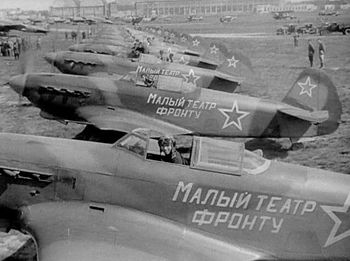 The Yakovlev Yak-9 was a single-engine fighter aircraft used by the Soviet Union in World War II and after. Fundamentally a lighter development of the Yak-7 with the same armament, it arrived at the front at the end of 1942. The Yak-9 had a lowered rear fuselage decking and all-around vision canopy. Its lighter airframe gave the new fighter a flexibility that previous models had lacked. The pilots who flew it regarded its performance as comparable or better than that of the Messerschmitt Bf 109G and Focke-Wulf Fw 190A-3/A-4. The Yak-9 was the most mass-produced Soviet fighter of all time. It remained in production from 1942 to 1948, with 16,769 built (14,579 during the war).[3] It was the first Soviet aircraft to shoot down a Messerschmitt Me 262 jet. It was used by North Korea in the Korean War.

This page lists all films that feature the Yakovlev Yak-9.