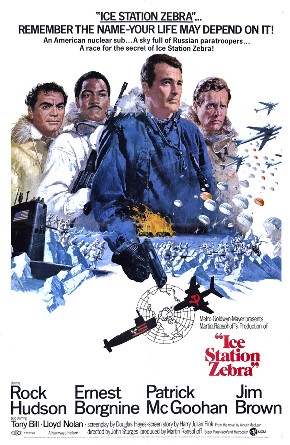 Commander Ferraday and the crew of the US submarine Tigerfish are assigned to ferry British agent David Jones to the North Pole to rescue the staff of Ice Station Zebra, a deep-arctic weather outpost. But there is a saboteur aboard, and Ferraday suspects Jones isn't telling him everything about exactly what awaits them at Ice Station Zebra.

Jones arrives in Scotland aboard this jet.

Seen at the airport as Jones is driven away.

US Navy helicopter which flies Boris Vaslov and Captain Anders out to the Tigerfish.
These footage will be used again in one television movie forerunner of the TV Series The Six Million Dollar Man : The Moon and the Desert.

Russian fighter jets which precede the troop transport planes. They appear to be models.

Made for Movie Transport Aircraft

Russian troop transport planes which fly the Soviet paratroopers led by Colonel Ostrovsky into the arctic. Like the MiGs, they're models.