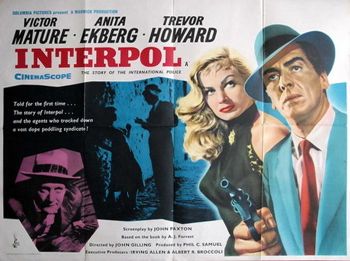 At 17:06, when the police car exited the airport, another Boeing 377 Stratocruiser is seen in the background wearing the PAA-Pan American World Airways colors.

Reg. G-AKNU ill-fated Short Solent 3 of Aquila Airways. She crashed on the Isle of Wight a couple of month after the filming (killing 45 of the 58 on board on 15 November 1957).

NOTA : an advertising of Aquila Airways is visible when Gina Broger is leaving the customs at Lisbon.

Note the Convair 340 on the right background.

Same airline on the last aviation action (the flight from Athens to New-York) :

But once in New-York, passengers are disembarking from a Stratocruiser ...

This Viking is a continuity error as it's a Douglas DC-3 performing the landing.

Reg. PH-DFK Douglas DC-6B c/n 43552/240 of KLM-Royal Dutch Airlines which christened her Jan Huyghen van Linschoten. On 19 February 1958 she suffured substantial damage on landing at Cairo-Almaza Airport and could be repaired. Sold to Yugoslavian Adria Airways as the YU-AFE in 1962. Scrapped in 1974.

Note the Lockheed 1049 Super G Constellation of TWA on the right.