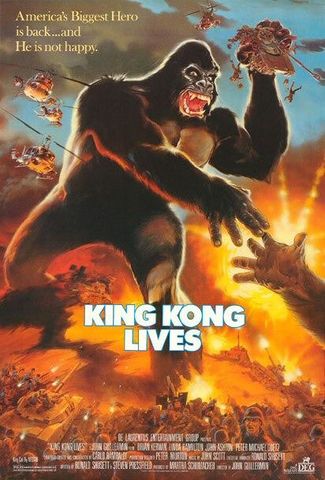 King Kong has been kept alive on life support by surgeon Amy Franklin since his plunge from the World Trade Center. He is in drastic need of a blood transfusion, but only another giant ape can provide the amount, and type, of blood Kong needs. Adventurer Hank Mitchell discovers a female giant ape in Borneo, though, and the surgery is a success. However Kong and his new mate escape to wreak havoc.

Stock footage from the 1976 movie is used to recap Kong's supposed death atop the World Trade Center in the first film. Later, several Iroquois are used by Colonel Nevitt's forces to spray Kong and his mate ("Lady Kong") with knockout gas.

The one on the left is a UH-1B model, notice the vent grill by the engine.

Hank returns from a trip to Borneo in this passenger jet.