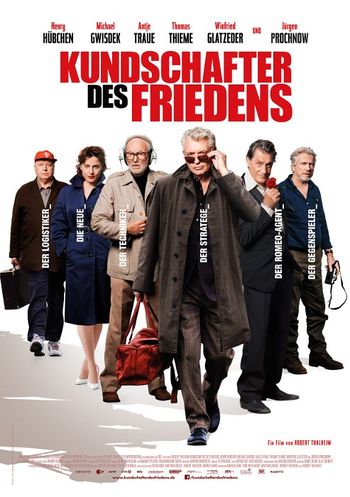 The former HVA (Hauptverwaltung Aufklärung / foreign intelligence service of the former German Democratic Republic) agent Jochen Falk is a retiree and is enlisted by the BND (Bundesnachrichtendienst / foreign intelligence agency of Germany). Another BND agent, Frank Kern, was kidnapped while helping the designated President Kazan to flee through the border between the two (fictional) ex-Soviet republics of Kichekistan, jeopardising their coming reunification. Not least for personal reasons - it was the core that exposed him 30 years ago - Falk agrees, but only on the condition that he can reactivate his old team: besides electronics Jaecki, organizer Locke and the not-so-young Romeo agent Harry. However, Paula also joins as an escort. Arriving in Katschekistan, the aged agents have to realize that times have changed drastically and that they are now dependent on all their skills.

A Lockheed C-130 Hercules altered by "morphing" to look like the Transall by removing two engines. But modeling has forgotten to correct the shape of the vertical stabilizer ... (and the nose and the landing gear fairing and ...).

Reg. D-FWJE Antonov An-2T (c/n 1G108-69, built in 1991) with all her skin clean of any text, drawing, red wingtip and the pink flag graphically edited. See the discussion tab for more details.