Night at the Museum 2 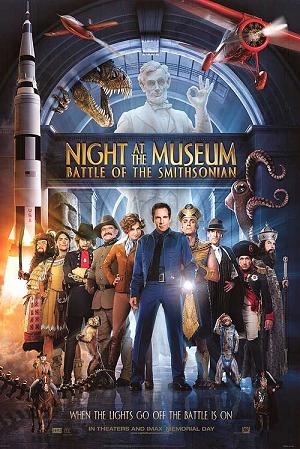 Promotional poster for Night at the Museum: Battle of the Smithsonian.


Security guard Larry Daley infiltrates the Smithsonian Institution in order to rescue Jedediah and Octavius, who have been shipped to the museum by mistake. A good portion of the following scenes take place in the Smithsonian National Air and Space Museum.

Note: Many or possibly all of the aircraft in this film are model or CGI aircraft. As such, footage shown may not be of actual aircraft however, where possible all aircraft representations have been identified.

Seen in the background of the hostess when Larry comes to the Smithsonian.
(screenshot needed)

Apollo seen between the two actors.

Depicting the aircraft flown by Emelia Earhart as the first woman to fly solo across the Atlantic. Registration NR-7952.

Lockheed L-10 Electra hidding a Ford 5-AT Tri-Motor (only its red wing is visible).

Or perhaps a V-1 (none of the both are in the collections of the Air and Space Museum).

Note the tailplane of a McDonnell Douglas F/A-18 Hornet in the bottom right.

Aircraft 'diving' under the wright Flyer.

On the left wings.