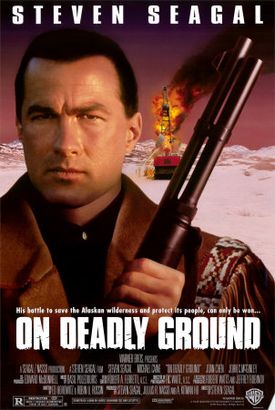 Former CIA operative Forrest Taft works as a fire-prevention specialist for Aegis Oil in Alaska. When his friend, who works as a rig foreman, is murdered he realizes Aegis' CEO Michael Jennings is scheming to steal land away from the Inuits, in order to build a new super-rig.

Stone and his men arrive in this helicopter. It is later used to track Taft and Masu in the wilderness, and crashes in an explosion set off by Taft. Reg. N102FW (now N65SP), Serial 425.

MacGruder and Miss Liles attempt to escape in this helicopter. Taft shoves MacGruder into the tail rotor. Fake Reg. N416EH (identical to the Bell 412 above).