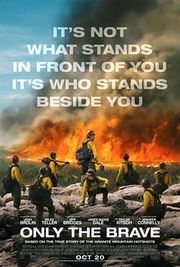 Only the Brave movie poster.


The film tells the story of the Granite Mountain Hotshots, an elite crew of firefighters who fought the Yarnell Hill Fire in June 2013, and is dedicated in their memory.

Used to transport Rescue Crew 7 to evaluation test site.
Serial 202 with fictitious registration N0312DF. A real chopper #202 is owned by the Cal Fire (California Department of Forestry and Fire Protection) but with registration N497DF.