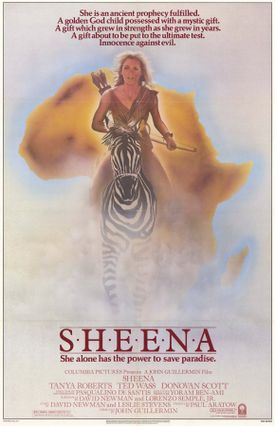 As a child, Janet Ames came to Africa with her geologist parents, who were killed in a cave-in. She was raised by the shaman of the local Zambuli tribe and named Sheena, Queen of the Jungle. She grows up and has to protect the Zambuli lands from an evil prince who wants to strip mine the tribal lands.

Vic Casey and Fletch Agronsky arrive in Tigora in a small private aircraft. They leave in the same plane at the end of the film. Registration N6761X, Serial 404-0675.

Seen at the Tigoran airfield when Vic and Fletch arrive in Azan. Reg. 5Y-AUS, Serial TE-1022.