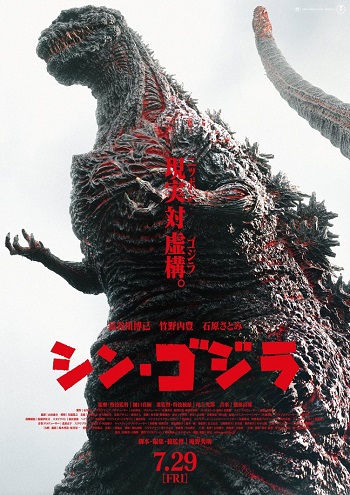 
In this film, serving as a reboot to the Godzilla franchise, the mysterious collapse of the Tokyo Bay Aqua Line is thought to be the result of an earthquake, but something far more vicious is waiting in the shadows, brought to existence by humanity's careless behaviour.

Alongside the AH-64 Apaches, AH-1 SuperCobras are deployed by the JASDF to try and attack Godzilla and slow his advance.

AH-1 SuperCobras of the JASDF.

Numerous AH-64s are seen attacking Godzilla, operated by both the JASDF and USAF.

Launched by the JASDF from an airbase, several F-2As are involved in trying to force Godzilla back, but their weaponry seems useless against him.

A Mitsubishi F-2 of the JASDF.

Two B-2 Spirit bombers of the 509th Bomb Wing are used to drop Massive Ordnance Penetrator bombs onto Godzilla, which succeed in injuring him. Both are destroyed, the first by Godzilla's atomic breath, while the second is obliterated by beams of energy shot from between Godzilla's dorsal plates.

Six sorties of MQ-9s are deployed by the USAF from their base at Yokota to carry out the first part of the Yashiori Strategy.

A General Atomics MQ-9 Reaper of the USAF.