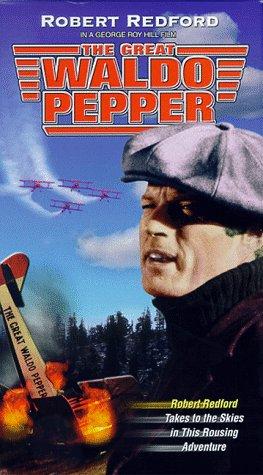 A biplane pilot who had missed flying in WWI takes up barnstorming and later a movie career in his quest for the glory he had missed.

Another Standard J-1 in a spectacular demo.

Most famous US aircraft of 1st WW, the JN-4 was a direct competitor as training airplane for the Standard J-1. Very similar to the J-1, but much more reliable and successful, they have been more than 6000 “Jennies” produced since 1915.

For this crash scene on the water, the JN-4 has been replaced by a more common De Havilland Tiger Moth.

Note the tank on the upper wing.

Highly modified DHC-1 Chipmunk without cockpit, anachronic for a story in the 10’s and 20’s.

Referred to in "The Great Waldo Pepper" as the “STILES SKYSTREAK”.

A replica of this famous triplane built in 1973 for use in this movie and registered N864DR. Imported to Australia privately, but subsequently acquired by the Australian War Memorial and loaned to the RAAF Museum. Relinquished by the RAAF Museum and believed to reside today, unregistered, at the Museum of Australian Army Flying, Army Airfield OAKEY QLD 4401..
Also seen in Airwolf (TV Series) - IMPDb: Frequently Seen Aircraft.

4 seat passengers version of the 8 Sirius. Only one built as 8C.