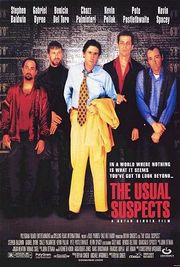 The film follows the interrogation of Roger "Verbal" Kint, a small-time con man who is one of only two survivors of a massacre and fire on a ship docked at the Port of Los Angeles. He tells an interrogator a convoluted story about events that led him and four other criminals to the boat, and of a mysterious mob boss known as Keyser Söze who commissioned their work. Using flashback and narration, Kint's story becomes increasingly complex.

Jump cut : the landing Boeing 747 is now just a twinjet.