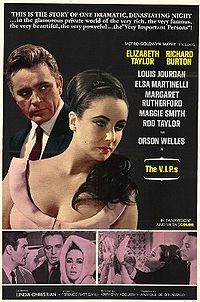 Fog delays a group of travelers headed for New York. They wait at the V.I.P. lounge of London Airport, each at a moment of crisis in his or her life.

The plane delayed by a thick fog at London Heathrow Airport. A Boeing 707-436 of BOAC in its first delivery. The company will merge with BEA in the 70’s, becoming the well known present British Airways.

Several other BOAC Boeing 707 on the tarmac of London Heathrow Airport, framing another Boeing 707 of Air India.

In the Londonian fog, 2 De Havilland Comet 4C of BOAC and a Bristol 175 Britannia of the same company in the background.

One of the most well-known airplane in aviation history. Here in an artist painting.
Same aircraft seen in another movie at IMPDb: Frequently Seen Aircraft.