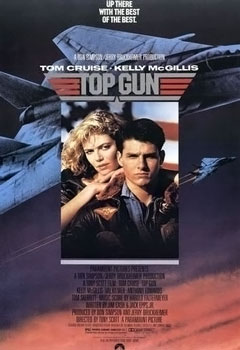 
When his wingman loses his nerve, Maverick gets the chance to attend the Navy's Fighter Weapons School, Top Gun. Here he meets his ultimate competition, his hero and true love but pays a tough sacrifice for it.

Portrayed as fictional "MiG-28" fighters, these aircraft are painted in fictional gloss black paint schemes with Soviet-esque roundels on the tails. They are claimed to carry Exocet anti-ship missiles, but are only shown with AIM-9 Sidewinders.
Same aircraft in other movies at IMPDb: Frequently Seen Aircraft. 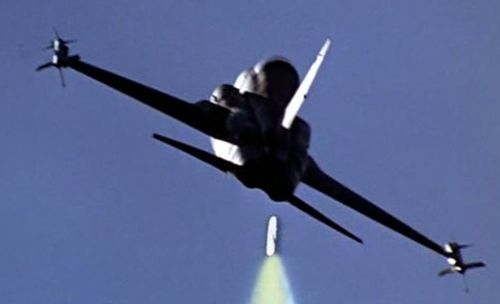 An F-5E portraying a MiG-28 seconds before being struck by a missile from one of the protagonists' F-14 Tomcats. The shots portraying destruction of aircraft were shot using models of the aircraft instead of the real airplanes.

The main feature in this film is the Tomcat, the U.S. Navy's Air Superiority Fighter. 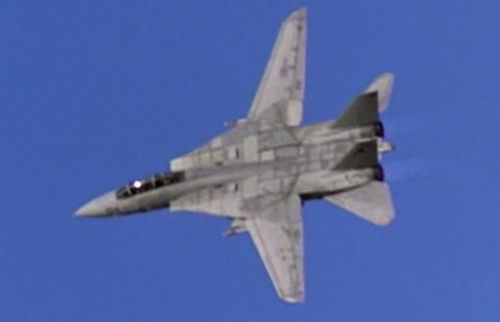 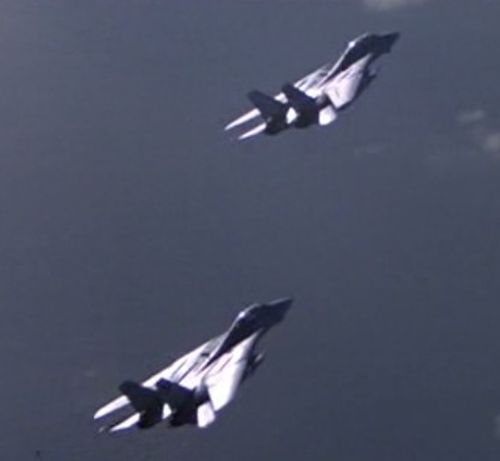 Used as the 'enemy' aircraft at Top Gun. 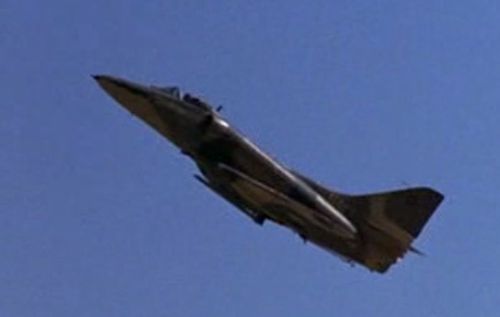 Behind a Douglas A-4 Skyhawk (wearing on its fin the badge of the Fighter Weapons School), four F-14 Tomcats and in the distance lots of aircraft: at right in front of the hangar, two Skyhawks - at least one two-seat - and three North American T-2 Buckeyes (white and red); at left of the flag, Skyhawks melt with BAe/McDonnell Douglas Harrier IIs.

Sikorsky SH-3H Sea King flying towards the camera. At left of the command tower, a Lockheed S-3 Viking (wings folded) is in the middle of five F-14. On the right, under the helicopter's shape, three F-14 hide another Lockheed S-3 Viking. Far right, two Grumman E-2 Hawkeyes with the low sun reflecting on their dome.

The drogue is visible on the right, behind the pod on the centerline pylon.