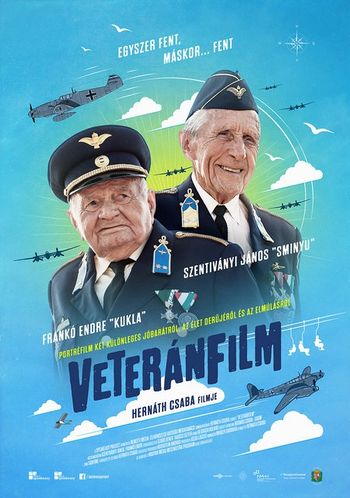 A Flying Fortress is reflecting on János flight glasses but the air interception was in fact against Consolidated B-24 Liberator.

Veteran Endre Frankó (1925 - 30/12/2020) on the front seat of this Hungarian shoulder-wing, two-seat training glider designed by Ernő Rubik Sr (who is the father of Ernő Rubik Jr -himself the designer of the famous Cube-).

In the background, the Helwan HA-300 (with the El Qūwāt El Gawīyä El Maṣrīya / Egyptian Air Force roundel).
This aircraft was first a Spanish project of Hispano Aviación. As is was too costly for the company to achieve too the HA-200 advanced jet trainer, the HA-300 was stopped but the design team, headed by Willy Messerschmitt was able to find financial founding in Egypt and an agreement with Hispano Aviación led to more studies and eventually six airframes were built and successfully flown.
In the foreground, veteran Endre Frankó is boarding the cockpit of a Messerschmitt Bf 109.

Front part of an Ilyushin Il-2M-3 with Yakovlev Yak-11 in the background. On the top right, the wingtip of the Yakovlev Yak-12R.
Filmed at the Szolnoki Repülőmúzeum (Airplane Museum) of Szolnok, Hungary.