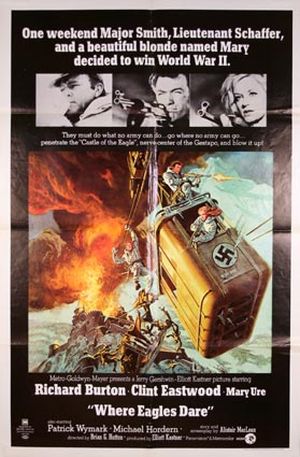 Allied agents stage a daring raid on a castle where the Nazis are holding an American General prisoner... but that's not all that's really going on.

Flies the Allied commando team into Bavaria and later rescues it at the end.
It's a Swiss Air Force Ju 52/3m, registration A-702 which was used as a Luftwaffe aircraft; the code could be that of the KGrzbV 109... if flipped.
Same aircraft in other movies at IMPDb: Frequently Seen Aircraft.

Flies General Rosemeyer to the Schloss Adler. Schaffer kills the pilot so it can't be used by the Germans. An American Bell HTL-4 (47G) equipped with German markings, this helicopter is the source of some controversy among viewers who aren't aware that there were rotary-wing aircraft during World War II, even on the German side (birotor Focke-Achgelis Fa 223 and Flettner Fl 282) . However, they looked much different than this, and it is several years too soon for the 47G. It is taken for granted by every character and even referred to as a helicopter in dialog.

"German" fighter planes seen at Oberhausen Airfield (in fact, loaned Austrian Air Force trainers). Smith cripples them by running into them one at a time with the bus so they can't take off and follow the Junkers.