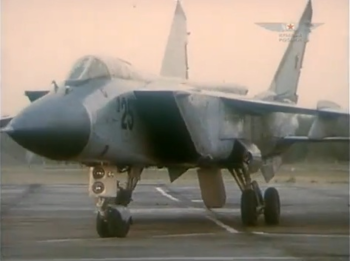 Mikoyan MiG-31 in Wings of Russia.

The Mikoyan MiG-31 (Russian: Микоян МиГ-31; NATO reporting name: Foxhound) is a supersonic interceptor aircraft developed to replace the MiG-25 "Foxbat". The MiG-31 was designed by the Mikoyan design bureau based on the MiG-25. The MiG-31 entered operational service with the Soviet Air Defence Forces (PVO) in 1982. It was the only Soviet fighter capable of intercepting the Lockheed SR-71 Blackbird, and did so several times starting in 1986. With the designation Ye-266, a re-engined Ye-155 shattered world records. It reached an absolute maximum altitude of 123,524 ft, or 37,650 m, and set a time to height record of 35,000 m in 4 minutes, 11.78 seconds, both of which were set by test pilot Alexander Fedotov. Ostapenko, his deputy, set a record of 30,000 m in 3 minutes, 9.8 seconds. Following the disintegration of the USSR in 1991 the budget for spares and maintenance collapsed, leaving many squadrons unable to maintain their aircraft. The MIG-31 AOG desk was created to address this problem. Approximately 370 are in Russian service, and approximately 30 are in service in Kazakhstan.

This page contains all films, TV series, and video games that feature the Mikoyan MiG-31.