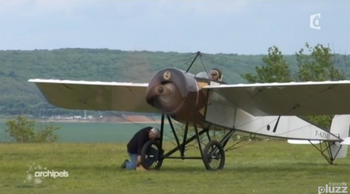 The Morane-Saulnier H (also known as Type H) was a single-seat sport aircraft produced in France in the years before the First World War. This derivative of the successful two-seat Morane-Saulnier G was used to complete the first non-stop flight across the Mediterranean, from Fréjus in the south of France to Bizerte in Tunisia on 23rd of September 1913. Some were ordered and pressed into service by French Army but it evolves into the L typ. Following a license agreement, a very similar plane was produced in Germany by Pfalz as the E.I when evolved into more powerful marks.

This page lists all films that feature a Morane-Saulnier H.