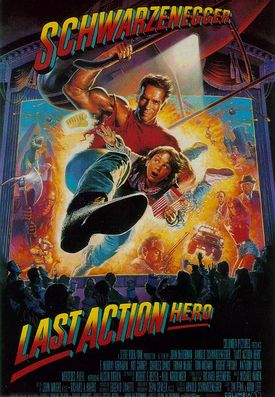 New York schoolboy Danny Madigan is a fan of the Jack Slater films starring Arnold Schwarzenegger in the title role. One day, he is accidentally catapulted into the universe of the latest blockbuster sequel and assists his hero Slater in battling the film's villains, all while trying to convince Slater and others of the absurdity of the movie-within-a-movie's plotline.

Police helicopter seen briefly when the Ripper is holding a group of schoolchildren hostage on a rooftop.

This helicopter tries to kill Slater as he rides down a glass elevator at the hotel. It unintentionally assists him and winds up killing several several mobsters when he ducks at a crucial moment.