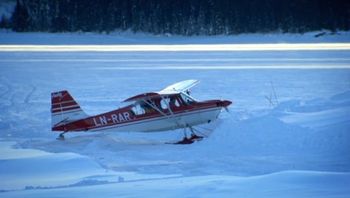 The Citabria is a light single-engine, two-seat, fixed conventional gear airplane, designed for flight training, utility, and personal use which entered production in the United States in 1964. Initially produced by Champion Aircraft Corporation, the Citabria was a derivative of designs the company had been building since acquiring the 7-series Champ from Aeronca in 1954. The model 7ECA Citabria entered production at Champion in 1964. The 7GCAA and 7GCBC variants, added in 1965, were joined by the 7KCAB in 1968. In 1970, Champion was acquired by Bellanca Aircraft Corporation, which continued production of all of the Champion-designed variants. Production at Bellanca ended in 1980 and the company's assets were liquidated in 1982. The Citabria designs passed through the hands of a number of companies through the 1980s, including a Champion Aircraft Company which was no relation to the Champion Aircraft of the 1960s. In that period, only one Citabria model was built — a 7GCBC marketed as Citabria 150S.

This page lists all films that feature a variation of the Bellanca Citabria.