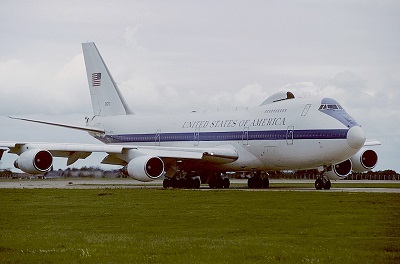 The Boeing E-4 Advanced Airborne Command Post, with the project name "Nightwatch", is an aircraft operated by the United States Air Force (USAF). To create the E-4 series, four Boeing 747-200B airframes were specially modified to serve as a survivable mobile command post for the National Command Authority, namely the President of the United States, the Secretary of Defense, and successors. The four E-4Bs are operated by the 1st Airborne Command and Control Squadron of the 55th Wing located at Offutt Air Force Base, near Omaha, Nebraska. An E-4B is denoted a "National Airborne Operations Center" when in action.

This page contains all films, TV series, and video games that feature the Boeing E-4.